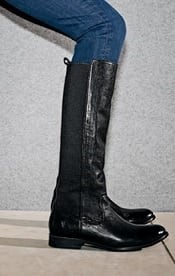 I’m drooling over two simple pairs of boots at the Nordstrom Anniversary Sale: these lovely flat Fryes (pictured) and these lovely stretch suede heeled boots from Cole Haan. The Cole Haan boots are apparently better for narrow calves, which is definitely not me, so I will continue to drool from afar — but the Frye boots look like they have real promise, with the entire back of the boot an elasticized gore. They’re currently on sale for $279 — after the sale ends on August 4 they’ll go back to their regular price, $418. Nice!