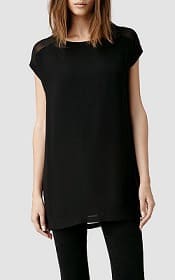 I recently took a long look through AllSaints offerings, and I’m kind of obsessed with half the store. They’re edgy but refined somehow, like this lovely silk and sheer polyester tunic top. For weekends, I think it would look great with some of the moto-leggings or coated leggings that we’re seeing this season, or perhaps worn with regular leggings and flat over-the-knee boots. Love. It’s available in sizes 0-10 for $215. (Also nice: this awesome satin dress for $360.) Myrthe Top

Psst: here’s a more affordable version, and a plus-sized one.