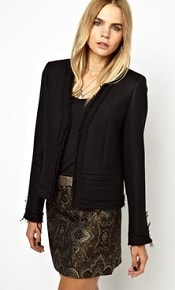 If you love the cut and style of Chanel jackets, but hate the colors and inevitable gold threads (is it just me or do they all have metallic threads?), this looks like the blazer for you. Love those defined seams, darts and pockets, and there’s a beauty to the distressed edges. The gold tone cuffs aren’t totally my thing, but then, I’m not a gold girl (and those are easily changed anyway). The blazer was $722, but is now marked to $469.46 at ASOS. Zadig and Voltaire Blazer with Raw Edges

« Weekend Open Thread
The Hunt: The Best Cashmere Sweaters »
Back to Top