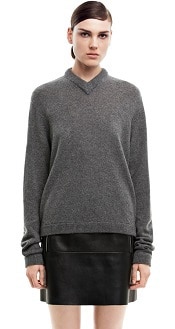 Our daily TPS reports suggest one piece of work-appropriate attire in a range of prices. This week of TPS reports comes to you from Stephanie Rahlfs of Adventures in the Stiletto Jungle, who also shared a week of her picks back in 2011. Welcome back, Stephanie!

Remember yesterday, when I lamented about how most of my favorite minimalist fashion labels fail in the workwear category? There are a few exceptions to this general observation, particularly over in the knitwear section at Acne Studios. This Stockholm-based label has more than its fair share of super conceptual pieces, but they also have some amazing luxury basics that boast just enough designer detail to make them interesting.