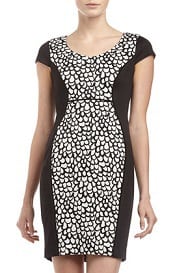 Last Call has started its Columbus Day Sale early, offering an extra 30-40% off everything, and there are a lot of great picks (including a ton from Lafayette 148 New York, albeit outside of the price range for a Thursday TPS). Inside today’s range (under $100), there is this lovely print-inset dress, which looks sure to be flattering. While it looks far too short in the picture, at 35″ long I’d bet it’ll be fine on most women under 5’5″ or so. (I know we just talked about this in a TPS a few weeks ago but can’t find the post.)  In any event, the price is definitely right:  it was $158, then marked to $119, but with the discount it comes down to $71.40. Lots of sizes still left. Marc New York by Andrew Marc Cap-Sleeve Print-Inset Dress Seen a great piece you’d like to recommend? Please e-mail [email protected] (L-2) Update: THIS is the other 35″ dress I’m talking about, pictured on a model who’s 5’5″. Incidentally it’s on sale now for $260. Readers, when shopping online do you have lengths you like for dresses and skirts?  I tend to think of 35″+ as being normal for dresses, and 22″+ being optimal for skirts.

« Suit of the Week: Calvin Klein
The Pros and Cons of Changing Careers: Career Changers Tell All »

« Suit of the Week: Calvin Klein
The Pros and Cons of Changing Careers: Career Changers Tell All »
Back to Top