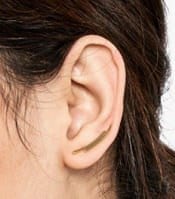 I’ve featured some non-traditional earrings before, but they’ve usually a bit more of a splurge — so I was excited to see that BaubleBar has many similar styles but for much, much more affordable prices, including threaders, crawlers, and more. (I’m undecided on the trend for a huge backing earrings, but got this pair of garnet earrings for myself.) For a more office-ready look, I like these delicate 1″ ear crawlers — it’s a fashion-forward look for work without being too subversive. They’re $32 at BaubleBar. BaubleBar Janet Ear Crawlers