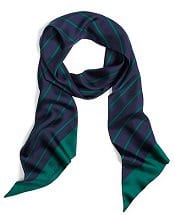 Brooks Brothers’ Friends & Family sale is on, and ends tonight! I always like the scarf and accessory selections there, so I’m drooling over these tie stripe oblong scarf — it seems fun in a “borrowed from the boys” kind of way. It was $98, then marked to $68, and it comes down to $51ish with code FF25. Brooks Brothers Tie Stripe Scarf