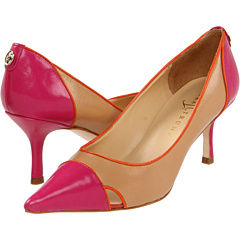 S’alright: we had the classic black pump yesterday. If, however, you’re in a bit more of a playful mood, I like this colorful shoe from Ivanka Trump’s new shoe line. Fuchsia pink, orange, and beige details — I love it. I think it would look great with neutrals like navy and white. (The shoe also comes in black on black and beige on white.) It’s $135 at Zappos.  Ivanka Trump – Ivee (Camel/Fuschia) – Footwear

« How to Improve Your Writing
Wednesday’s TPS Report: Lexie Dress »

« How to Improve Your Writing
Wednesday’s TPS Report: Lexie Dress »
Back to Top