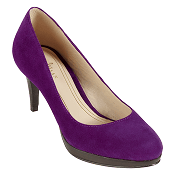 Cole Haan is having some great sales (albeit final ones) on their website — but if you know your size you’re in luck. Take, for example, these fun purple suede shoes. They were $298, but are now marked to $80; with code NEWYEAR they come down another 30% to $55.99. Hooray for sales! Cole Haan Chelsea Low Pump