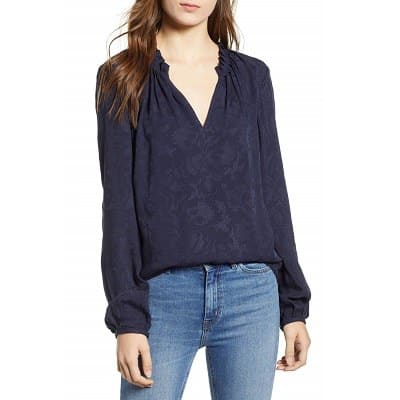 This pretty jacquard blouse keeps catching my eye — I love the pullover style, the detail at the collar, and the wide split neck styling. We’re picturing it in the navy here, but the red and green colors are great festive-but-not-too-much colors for the holidays, and the teal is so popular it’s down to lucky sizes only. The blouse is machine washable, and comes in sizes XXS–XXL for $79. Floral Jacquard Blouse

« Suit of the Week: J.Crew
How to Choose to Be Happy »

« Suit of the Week: J.Crew
How to Choose to Be Happy »
Back to Top