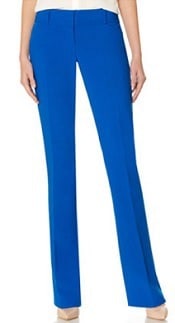 Cobalt is back, and it isn’t just among the big designers like McQueen — both Limited and Express have cobalt trousers this season. (Express’s are a bit more subdued if these seem a bit… bright.) Limited also has them as “ankle trousers,” and they also come in a bright green. (There is also a matching blazer.)  The pant was $79.95, but is marked to $47.97 today — it’s available in regular, petite, and tall sizes. Cassidy Bootcut Pants

The Express pants go up to size 18, but here’s another pair that goes up to size 22. Seen a great piece you’d like to recommend? Please e-mail [email protected] (L-all)