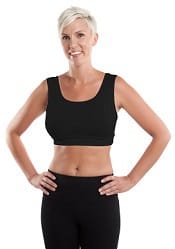 We haven’t talked about demi camisoles in a while, but as summer is almost upon us, and everyone wants to shed unnecessary layers, now is a great time to discuss it. In hot weather, a regular slip or camisole just seems too heavy; they bunch up and they leave lines. Still: cleavage is never work appropriate, which is (often) the whole point of the camisole. Enter the demi-camisole, with a modest neckline but not a lot of fabric to bunch up around your waist. There are many companies that do this, but today I’m liking the look of these Halftees simple tanks — they come in 11 colors, are reversible, and are machine washable. Huzzah! They’re $17.99 at Halftees.com (but use code MOTHERS20 to take 20% off). Tank Style Halftee