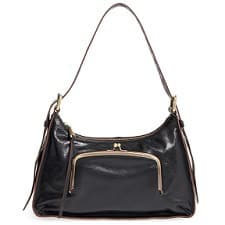 If you’re looking for a quality bag and “designer” isn’t important to you, I know many readers have had a lot of love for Hobo bags and wallets over the years.  I like the classic, almost vintage vibe to this shoulder bag, as well as the Italian leather, fun, colored lining, and kiss-lock pockets. The bag is available in five colors for $228. HOBO ‘Harloh’ Leather Shoulder Bag