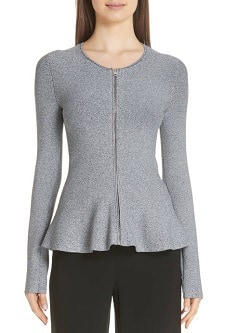 This jacket from Theory looks kind of of fabulous. I like the very sleek, very tailored style, but it still looks comfortable like a sweater — and in fact, they have a very similar sweater (made from the same blend of fabrics) that’s black and doesn’t have a zipper. Theory also has a few other things if you like a match-y look, including a sleeveless top that could go underneath, a fit & flare sweater dress (although it’s not shown with the jacket — and it also comes in black/bordeaux), and a flared skirt. Lots of great options! This cute jacket is $395 at Nordstrom and is available in sizes P–L. Marl Peplum Jacket

Macy’s has a more affordable option, and Nordstrom has an alternative in plus sizes.