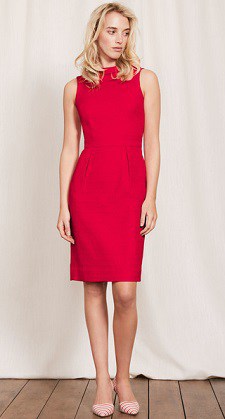 Boden always has a pretty killer clearance sale in early October, and this year is no different — TONS of stuff is marked below $50, from blazers to dresses and more. (Check out our post on how to build a work wardrobe at Boden if you’re new to the brand!) There are lots of lucky sizes left, but one of their classic dresses, the Martha, has a ton of colors and sizes left. This dress is now $45-$120 (down from $150) depending on color and size — the pictured red dress is $90. (Try it with a leopard print belt or shoe, à la Selina Meyer.) Note that some sales may be final. Martha Dress

« Suit of the Week: Nine West
Reader Mail: Are Colored Tights Ever Conservative Enough? »
Back to Top