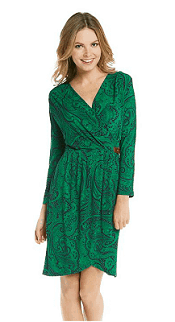 I realize green paisley may not be everyone’s bag, but I think this is a really lovely color, pattern, and dress — and I think the dark colors make this wearable pretty much year round. It’s on sale at a variety of places online, but Bon-Ton (a store I’m admittedly not very familiar with) has the most sizes for the best price: the $120 dress is marked to $44.99. (The sleeveless version of the dress is also available at Zappos in petites, Lord & Taylor in XL, and Saks). Happy Friday, ladies! MICHAEL Michael Kors Long Sleeve V-Neck Faux Wrap Dress