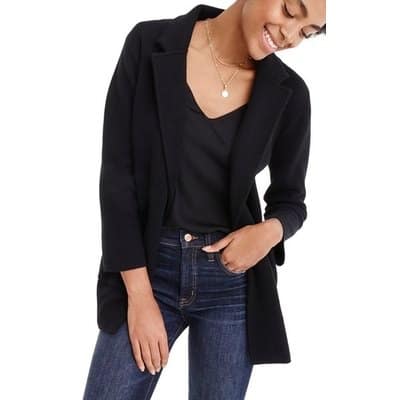 Our daily workwear reports suggest one piece of work-appropriate attire in a range of prices. We recently did a Hunt on jardigans, and I think this was new-ish when we rounded those up (although J.Crew Factory has had a very similar option for $50). If you’re looking for a longer sweater blazer in a merino wool and cotton blend (this is also part polyester), this is $138 and comes in several nice colors (black, navy, heather gray, and heather khaki). It’s available in sizes XS–XL, and you can find it at both Nordstrom and J.Crew. J.Crew New Lightweight Sweater Blazer 2019 Update: We’re adding this dress to our Workwear Hall of Fame because after it’s still around, coming out in new colors, and getting rave reviews. Nordstrom has the most options, but occasionally Amazon has the dress as well, sometimes as low as $20. This post contains affiliate links and Corporette® may earn commissions for purchases made through links in this post. For more details see here. Thank you so much for your support! Seen a great piece you’d like to recommend? Please e-mail [email protected]

« Workwear Hall of Fame: Transport Tote
Previously, on Corporette… »
Back to Top