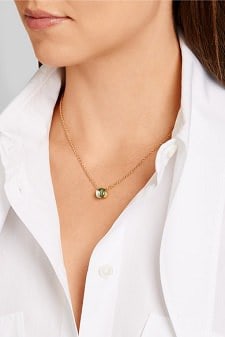 Wow: what a great necklace. I love how simple it is, no bezel or bling to speak of, just the clean, faceted lines of the semi-precious stones. I’ve pictured the prasiolite, but it’s also available as an amethyst and white topaz… all for the splurgey cost of $2000. POMELLATO Nudo 18-karat rose gold prasiolite necklace

This Etsy seller has a few similar items for far more affordable prices, as does this one, and Last Call and The Real Real both have discounted pieces from Pomellato.