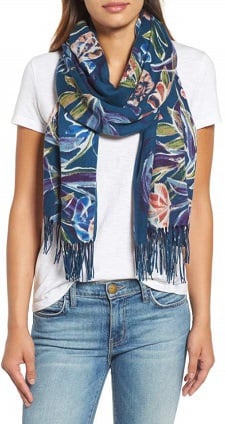 I’ve said it before, I’ll say it again: A nice thick and soft office pashmina can be helpful in so many situations, particularly in fall weather when it’s hot one day and cold the next. Nordstrom always has a nice wool and cashmere option for $99, and they have a bunch of fun prints this year — I’m really not a floral person but I dig this “pressed flower” one. Don’t worry that it’s called a scarf — it’s 28″ x 80″, which is actually bigger than the “oversized wrap” pictured here. The point is that it’s thin enough to wear as a scarf OR a wrap if you want to. It’s $99. Pressed Flowers Tissue Weight Wool & Cashmere Scarf

« How to Deal When Your Boss Makes Rude Comments About Your Engagement Ring
Workwear Hall of Fame: Pleat-Neck V-Neck Top »

« How to Deal When Your Boss Makes Rude Comments About Your Engagement Ring
Workwear Hall of Fame: Pleat-Neck V-Neck Top »
Back to Top