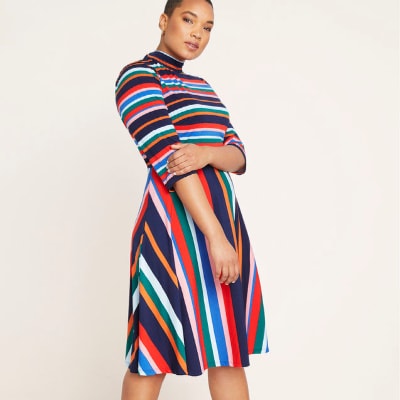 A few months ago, my friend introduced me to Ingrid Fetell Lee and her blog Aesthetics of Joy. Her goal is to give you tools to make your life more joyful, all backed by scientific research. Cultivating joy wasn’t something I had given a lot of thought to previously, but now I’m on the lookout! This rainbow-striped dress is definitely sparking joy in me in this dreary post-holiday stretch. I particularly like the elbow-length sleeves and fit-and-flare shape.

Two options in other size ranges are from ASOS (regular sizes) and NY Collection at Macy’s (petite).

« Coffee Break: CBD Stiletto Cream
The Most-Loved Denim at Nordstrom »
Back to Top