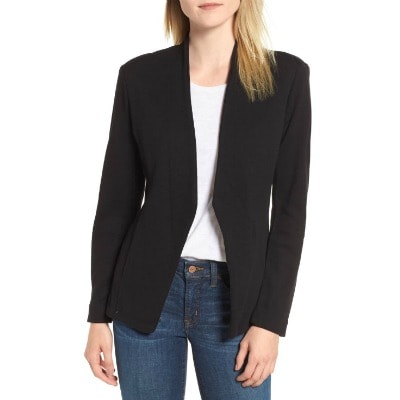 For many years, I had an “Office Cardigan.” This was the cardigan that lived on the back of my chair and I wrapped around myself whenever I was too cold or needed to cover a sleeveless sheath dress. Invariably, it ended up stretched out, faded, and gross-looking after a few months. Recently, I’ve upgraded to an “Office Blazer” to look a bit more formal. The thing about an Office Blazer is that it has to accommodate a variety of outfits and still look intentional — not like something you threw on at the last minute (even though, obviously, you did). This cotton-blend blazer from Nic + Zoe looks like it would do the job. It would look great with pants, skirts, or dresses, and the fact that’s collarless means that it can accommodate a variety of necklines. The blazer is $148 at Nordstrom and available in sizes XS–XL. Sleek Jacket

Macy’s has a plus-size option from Calvin Klein for $129.