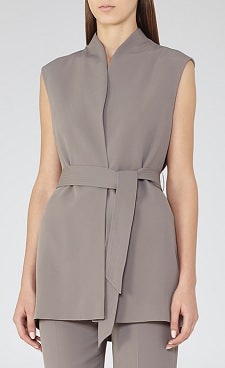 I am not a huge fan of the sleeveless vest for work — I think it’s way too hard to make one look good with a sleeved layer beneath it, and sleeveless isn’t acceptable for many conservative workplaces (know your office!). So I chose to feature this suit with a caveat: it also comes with a regular jacket. Having said that, I do think for the right woman, at the right office, this fluid, high-collared look is lovely; it’s professional and buttoned-up without being stuffy. The vest (Karmine Gilet) is $370, the pants (Karmine Trouser) are $240, and the regular blazer (Karmine Fluid Blazer) is $445.

« Online Shopping Apps for Busy Women: Save Money, Get Deals, Keep Track of What You Want
Thursday’s Workwear Report: Pleat Peplum Sweater »
Back to Top