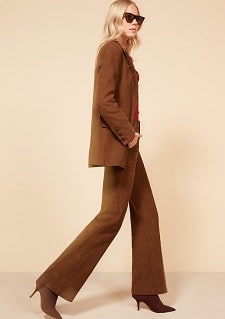 Full disclosure here: This is a corduroy suit, and so it’s probably not the thing you want to wear to your conservative office (but: know your office!). But: who knew Reformation had suits at all? This one comes in brown and a light rose (all made from corduroy deadstock fabrics) and I love the long, clean lines of the flared pants and the slouchy perfection of the blazer. The jacket (Sampson Blazer) is $228, and the pants (Dillon Pant) are $148.