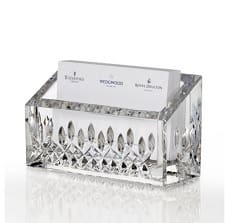 Oooh, pretty! I remember a work friend once telling me a story about how she and her boyfriend made a special trip one weekend to the MoMA Store to look at and ultimately purchase a small, clear acrylic business card holder. “That’s it?” he asked. “Yup,” she replied. You can still get that same $9 business card holder (online these days), but if you DO want something fancier you can always get this lovely Lismore business card holder, from Horchow. I love the simplicity of it, mixed with the general beauty of the Waterford crystal. It’s $100 at Horchow. Waterford Lismore Business Card Holder