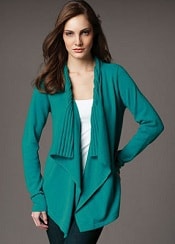 This cashmere cardigan (a Neiman Marcus exclusive) is new to the sale section, and I think we have that to thank for the number of sizes still left. I like the interesting twist detail at the collar, and like the lines of the cardigan — I’ve decided the waterfall cardigans look best when they’re longer in the front and shorter in the back, but this one isn’t too short. It’s available in teal (pictured), black, and snowflake, in S-XL — and for good cashmere it’s a steal: was $415, now $145 at Neiman Marcus. Cashmere Twisted Cable Cardigan

« Coffee Break: Safia Hobo
Previously, on Corporette… »
Back to Top