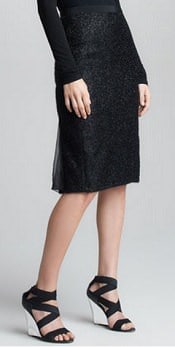 I am not a fan of beading and sequins. (I guess that’s a good thing — I just read that beading can often be indicative of child labor?) So I really like this non-beaded but sparkly (metallic tweed!) and slightly floaty (chiffon godets!) skirt, from Donna Karan.  I like the longer length to it, and the fact that it can be gussied up or down — wear it with something simple like a turtleneck or festive blazer for an office party… wear it with something fun like a sexy tank top for a dinner date.  The sale is also pretty amazing: the skirt was $1,295, but is currently marked to $317 at Last Call. Donna Karan Chiffon Metallic Tweed Skirt

Here’s a plus-size version (also in regular sizes), as well as another more affordable version.