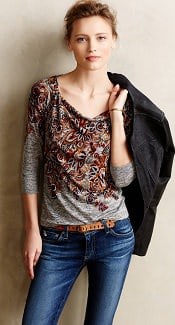 This top is a bit casual for wearing with a suit, but I do love it for the weekend, or even a casual office (with a suiting separate, though, like trousers or a pencil skirt). I love the deep oranges and red florals in the top — how rare is that for me?! — and I like that they’re set against a gray tee. It’s mashine washable, available in regular and petites, and $78. Anthropologie Jacaranda Top