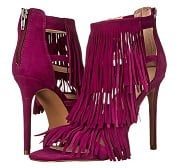 Zappos has this gorgeous heel in six colors, and it’s hard to choose which to drool over more.  For me it’s gotta be the blue, but it’s a really close call with the purple or the taupe.  They’re $129, available in sizes 5.5-10.   (Note that Nordstrom only has it in four colors, but is worth checking for the 96 (!) positive reviews.)  Steve Madden Fringly