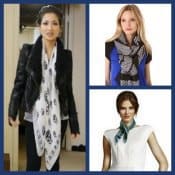 Maybe this is a cultural issue, but I’d never, ever, wear a scarf to a conference. Ever. At the office, sure, if there’s no meetings. At a conference, however, there is no more surefire way to be treated like a hostess/secretary/admin than wearing a scarf. The women who actually have those jobs are all colour-coordinated, but that doesn’t help. All people see is scarf or no scarf. I think it’s a real shame, as I like scarves and the femininity they bring to an outfit. Instead, I’ve settled for statement jackets, or a skirt or shoes that “pop”. Is this because I’m in a (very) male dominated business, or is it a Europe/US thing?

We’ve talked about how to wear scarves, as well as how to pack for conferences and what to wear to conferences before, of course, but this is a new one — and a very interesting one, given that scarves would never strike me as something a) unprofessional in general, b) hostess/secretary/admin. When I worked at a very male-dominated law firm, one of the female partners I worked closely with — who certainly commanded respect from everyone — was known for her collection of Hermes scarves that she would wear long and loose beneath her blazers, a bit like the “drape scarf with bomber jacket” look above from Wendy’s Lookbook. (If you haven’t seen it, her scarf-tying tutorial is pretty awesome; the screenshot above is from the “companion” video. Another great resource generally: Une Femme d’un Certain Âge.) The next person who comes to mind when I think of scarves is an intern I worked with a few years ago, who often accessorized a simple long-sleeved t-shirt or sweater with a scarf wrapped loosely around her neck, almost like a cowl (as pictured in the blue/black picture above — that’s the DvF Hanovar Scarf, available for $165 at ShopBop.) It always struck me as a professional, put-together look. The ONLY scarf look that I can think of that has negative connotations — for me at least — is the “flight attendant/50s schoolgirl” look: a scarf tied once, tightly around the neck, with the ends left out (as in picture #3 above. Gorgeous scarf, though: it’s the Pucci Swirl Silk Scarf, available at Ventee-Privee for $89 (was $250); click here for an invite if you’re not a member.)  I’m sure I’ve seen women pull it off in a stylish way, but I feel like it’s a hard look to make modern unless you also have the benefit of being French. Now — maybe what reader A is getting at is that a scarf is a more feminine look. But both of the women I mention above (the partner and the intern) wore very simple pants. In fact it’s almost hard for me to imagine how something as simple as a scarf could be seen as “so feminine that obviously she’s the hostess.” Pink glitter platform heels, sure. A mini-skirt, sure. Even big tacky jewelry (a la Melanie Griffith’s “before” in Working Girl) — sure. But a scarf? Some social media images (flight attendant) via Deposit Photos / ViewStock.

Readers, what do you associate with scarves? What is your favorite way to wear them for work? In general, what do you wear for a conference in a male-dominated profession? 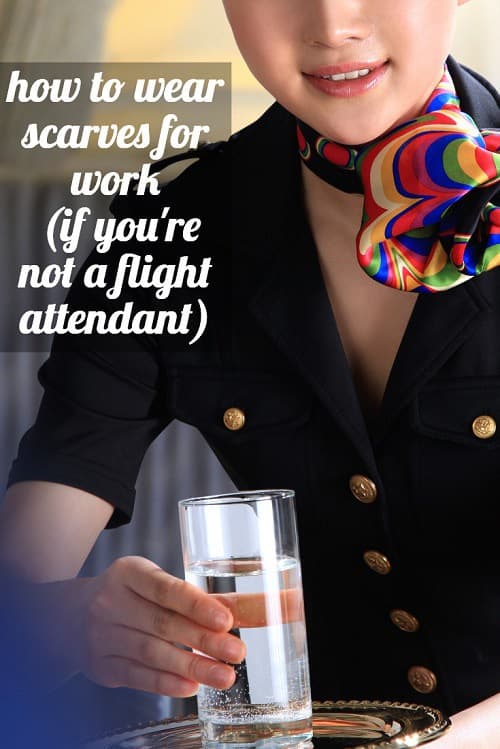