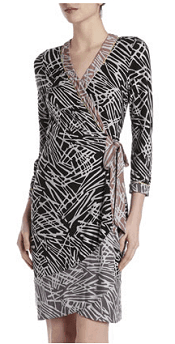 Happy May, ladies! Today I’m liking this interesting wrap dress — the mix of prints and colors makes it really cool, and, I think, flattering. I like the high neckline and the 3/4 sleeves; I would definitely wear a slip beneath this. It was $228, then was marked to $129, but with Last Call’s Mother’s Day sale you can take 30% off everything, bringing the dress down to $90.30. BCBG Naomi Mix-Print Wrap Dress

P. S. Ooh, just found another cute BCBG wrap dress, this one for $87 and in a dark blue brushstroke pattern –I’m even more in love!

« Coffee Break: Marli Too Wedge
Open Thread: The Best Products for Summer »
Back to Top