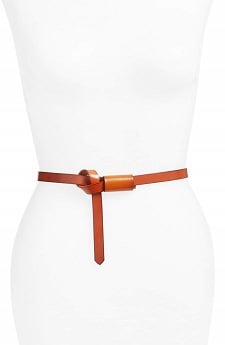 I always try to keep an eye out for belts with dresses (a great look, as we learned by studying Selina’s style in Veep!) because it can be really tough to find affordable belts that look good without a belt loop to tuck the end of the belt into. This $40 option from Nordstrom looks great, although it’s only available in size “Medium/Large” right now in both cognac (pictured) and black. (I do believe there was a Small/Medium size previously; if you really love it try calling your local store to see if they have any in stock.)   ‘Lasso Western’ Skinny Belt

« Do You Buy Duplicates Of Your Favorite Clothes?
Wednesday’s Workwear Report: Colorblock Sheath Dress »
Back to Top