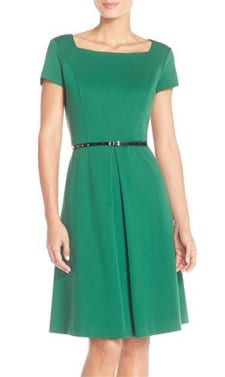 Our daily workwear reports suggest one piece of work-appropriate attire in a range of prices. Reader S wrote in to note: “Kat — this new dress cropped up today on Nordstrom, and I’ve already placed an order: looks elegant and classic (love the not-too-high but work-appropriate neckline), plus it’s machine washable!” Lovely! I like the square neckline (great for underneath sweaters and blazers) and the elegant fit and flare shape, and the fact that it’s machine washable never hurt anyone. It’s $118 at Nordstrom. Ellen Tracy Pleat Ponte Fit & Flare Dress Here’s a plus-size option. Seen a great piece you’d like to recommend? Please e-mail [email protected] (L-3)