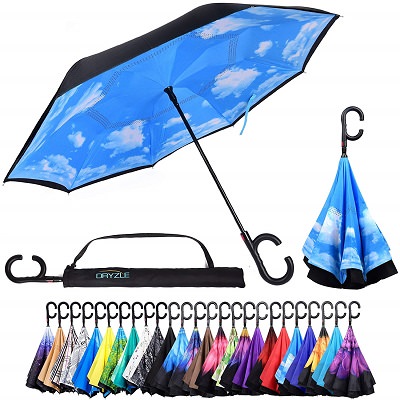 Readers were discussing the best umbrellas a few months ago, and I set the topic aside because HEY, it will be spring soon, allegedly, some day, right? This pictured “inside out” umbrella was recommended by a reader, and I like that it reverses so the wet part is tucked up inside the umbrella — great for when you’ve got a ways to walk indoors with a wet umbrella, or even for when you have to stick the umbrella in your bag when it’s still wet. (I often just grab a plastic garbage bag before I run out the door on days like that to keep in my tote, but that’s me — it seems like no matter how diligent I am with bringing my own cloth bags I still seem to have a never-ending supply of plastic grocery bags!) The pictured umbrella is $24.95 at Amazon, available in a ton of fun colors and prints. Reverse Inverted Inside Out Umbrella – Upside Down UV Protection Unique Windproof Brella That Open Better Than Most Umbrellas, Reversible Folding Double Layer