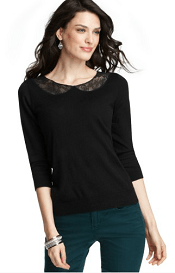 I’m going to be honest: I hate the “collar” look that’s going on right now.  They so often look “little girl” or just plain “fug.”  (I particularly hate the “add a collar” trend — I would almost always prefer a pretty necklace to something that is, in my mind, a souped up dickey.)  That said… I have to begrudgingly admit that this lace collar sweater from Ann Taylor is both on trend and (gaaah) cute. The price is also right: the sweater was $49.50, but you can take 40% off for today, bringing the price down to $29.70.  Lace Collar 3/4 Sleeve Sweater