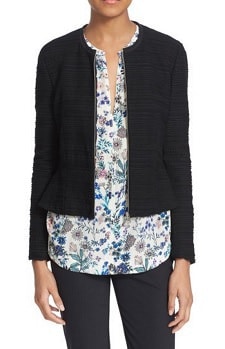 There’s still a ton of great fall stuff in the Nordstrom Anniversary Sale, with lots of sizes left, including this prettty black knit cotton-blend jacket from Rebecca Taylor.  I love the peplum waist, the stretchy fabric, and the texture to the knit, which gives it a lot of interest.  It might just be the perfect kind of thing to buy to keep as the black jacket you keep at the office.  It’s currently marked to $317, but will go back up to $475 after the sale ends. Rebecca Taylor Texture Knit Zip Front Fitted Jacket

You can see all our picks from the NAS here.

« Coffee Break: Classic Hardcover 17-Month Agenda
5 Tips to Stay Cool on Your Commute and on Really Hot Workdays »
Back to Top