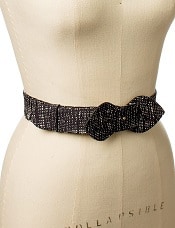 When I posted the Sophie Theallet circle skirt in this same fabric, I liked the belt then; that’s a rarity with me because I never like the belt things come with. It turns out, The Limited likes the belt so much that they’re selling it by itself. It’s $49.90, available in sizes S, M, and L. Sophie Theallet Fabric Collar Button Belt