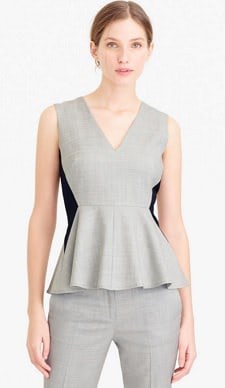 Our daily workwear reports suggest one piece of work-appropriate attire in a range of prices. This colorblock peplum top in J.Crew’s Super 120s wool looks like a modern addition to a classic suit, or a great way to make a more casual work separate (a pencil skirt, ankle pants) feel more formal. Of course, know your office as far as sleeveless workwear is concerned — I’d layer this under a cardigan or blazer, or on top of a collared blouse. It was $128 full price but is marked down to $79. (With code SHOPNOW you can get $75 off your $200+ purchase or $25 off your $100+ purchase.) J.Crew Colorblock Peplum Top Here’s a more affordable option and a plus-size alternative (solid and striped). Seen a great piece you’d like to recommend? Please e-mail [email protected] (L-5)

« Suit of the Week: Altuzarra
Must-Read Business Books for Women »

« Suit of the Week: Altuzarra
Must-Read Business Books for Women »
Back to Top