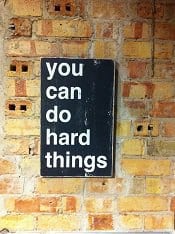 What should you do when mental health issues are holding you back and making it difficult for you to build the career you want? Reader O wonders…

I have struggled with mental health problems for years and as a result have always worked really terrible jobs (combination of poorly paid, admin/dogsbody type roles with bullying managers). I know it’s a combination of fear and rock bottom self esteem that’s the problem. I am in my early twenties and have luckily never been unemployed but I’ve never liked any of the jobs I’ve had. I am planning on going back to university for a masters degree soon with the hope of working in either journal publishing or widening participation but how can I make sure, once I’ve graduated (again), that I don’t keep going for bad jobs? Any help would be greatly appreciated.

I’m so sorry to hear that, O. We’ve talked a bit about imposter syndrome, as well as discussing the book The Confidence Code, and I would encourage you to read both of those posts. I have a few thoughts for you, but I can’t wait to see what the readers say.

I’m curious, ladies — have you ever felt that you weren’t worthy of good jobs?How do you avoid unhappy jobs?

N.B. These substantive posts are intended to be a source of community comment on a particular topic, which readers can browse through without having to sift out a lot of unrelated comments. And so, although of course we highly value all comments by our readers, we’re going to ask you to please keep your comments on topic; threadjacks will be deleted at our sole discretion and convenience. Thank you for your understanding!